Join us at our Semi Permanent MakeUp training locations in Dubai, UAE. Here we offer courses on everything you need to know about SPMU. Our depth courses will not only teach you about SPMU and being a great SPMU artist, but also business solutions to ensure amazing success.

This course is designed to get you started on your journey as a successful SPMU technician. No previous training/knowledge is required. Beginner’s to the industry will fully appreciate the step by step training approach we adopt in our teaching . You can also sign up for this course if you’re an existing eyebrow technician but you feel the training you received elsewhere did not match your expectations.

This class is perfect for beginners and artists looking to expand their skill set and offer more services to their clients.

Our elite instructors will teach you the proper technique on how to tint lips and avoid the many mistakes that beginners make.

Learn the correct way to provide semi-permanent eyeliner that will last. This service is a great up-sell for your clients. 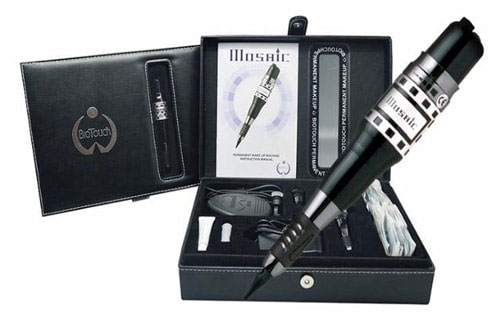 What is Permanent Makeup ?
It is a cosmetic technique which employs tattoos (permanent pigmentation of the dermis) as a means of producing designs that resemble makeup, such as eyelining and other permanent enhancing colors to the skin of the face, lips, and eyelids. It is also used to produce artificial eyebrows, particularly in people who have lost them as a consequence of old age, disease, such as alopecia totalis, chemotherapy, or a genetic disturbance, and to disguise scars and white spots in the skin such as in vitiligo. It is also used to restore or enhance the breast’s areola, such as after breast surgery.
Most commonly called permanent cosmetics, other names include dermapigmentation, micropigmentation, and cosmetic tattooing, the latter being most appropriate since permanent makeup is applied under sterile conditions similar to that of a tattoo. In the United Arab Emirates the inks used in permanent makeup are subject to approval as cosmetics by the UAE Ministry of Health & Prevention. The pigments used in the inks are color additives, which are subject to pre-market approval under the Drug, and Cosmetic Act. However, because of other competing public health priorities in the UAE and a previous lack of evidence of safety problems specifically associated with these pigments, FDA traditionally has not exercised regulatory authority for color additives on the pigments used in tattoo inks.
Immediate results
Permanent makeup results in enhanced features of the face—definition is rendered to eyebrows, eyes and lips by the use of colors. Results can imitate topically applied cosmetics or can be quite unnoticeable, depending upon the design, color value and amount of pigment used.
At first, permanent makeup results may look darker. This is due to color remaining in the outermost epidermal layers of skin at the start. Color softens within a few days during the healing process as the upper layers of epidermis slough and are replaced by new epidermal cells.
Long-term results
The best possible color results can perform for many years or may begin to fade over time. The amount of time required for this depends per person. While permanent makeup pigment remains in the dermis, its beauty-span may be influenced by several possible factors, including environmental, procedural and/or individual factors. Sun exposure fades color. The amount and color of pigment deposit at the dermal level can affect the length of time that permanent makeup looks its best. Very natural-looking applications are likely to require a touch-up before more dramatic ones for this reason. Individual influences include lifestyles that find an individual in the sun regularly, such as with gardening or swimming. Skin tones are a factor in color value changes over time.
Imperfections
There are cases of undesired results. The four most common complaints are “too dark,” “wrong color,” “uneven” and “too big.” A skilled, experienced permanent makeup professional is able to adjust the color and evenness of permanent makeup results in most cases. A design which is too large presents a serious challenge. Costly pigment lightening techniques and/or removal may be the only solutions.
Adverse effects and complications
As with tattoos, permanent makeup may have complications, such as migration, allergies to the pigments, formation of scars, granulomas and keloids, skin cracking, peeling, blistering and local infection. The use of unsterilized tattooing instruments may infect the patient with serious diseases such as HIV and hepatitis. Removal problems may also ensue, due to patient dissatisfaction or regret, and they may be particularly difficult to remove in places such as eyelids and lips without leaving permanent sequelae. Compliance with ‘standard precautions’ and a uniform code of safe practice should be insisted upon by a person considering undergoing a cosmetic tattoo procedure. It is essential that technicians use appropriate personal protective equipment to protect the health of the technician and the client particularly in the prevention of transmission of blood borne pathogens. It is also essential that technicians have been properly trained in the application of pigment into the skin to avoid migration. Tattoo pigments can “migrate” when a technician “overworks” an area, especially around the eyes where the pigment can “bleed” into surrounding tissue. Migration is generally avoidable by not over-working swollen tissue. Understanding the need to minimize swelling and recognize a good stopping point is paramount to successful application. Removing migrated pigment is a difficult and complicated process. On very rare occasions, people with permanent makeup have reported swelling or burning in the affected areas when they underwent magnetic resonance imaging (MRI). However a detailed review of the cases within the medical literature involving cosmetic tattoos indicates that poor quality pigments, pigments adulterated with heavy metals, and pigments with diamagnetic properties may have been the causative factors in most of those cases. Topical anesthetics are often used by technicians prior to cosmetic tattooing and there is the potential for adverse effects if topical anesthetics are not used safely. In 2013 the International Industry association CosmeticTattoo.org published a detailed position and general safety precautions for the entire industry. The causes of a change of color after cosmetic tattooing are both complex and varied. As discussed in the detailed industry article “Why Do Cosmetic Tattoos Change Color”, primarily there are four main areas that have influence over the potential for a cosmetic tattoo to change color; 1) Factors related to the pigment characteristics 2) Factors related to the methods and techniques of the tattooist 3) Factors intrinsic to the client 4) Factors related to the client’s environment and medicines Technicians need to have a comprehensive understanding of these influences to achieve more predictable outcomes for their clients. Clients need to ensure that they enlist the services of technicians that have proper training which should include a period of supervised application of pigments prior to allowing a technician to perform any procedure. Because regulations vary from state to state and country to country, training and experience can vary widely.